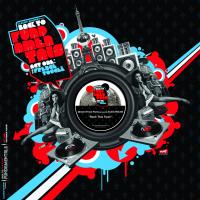 In the late 90's when the French Touch exploded, it was an unprecedent event for all of us french DJ's and producers. We all knew each other and had been in a joint effort, struggling to get our music, House music, appreciated for years. As success was finally coming to each one of us, we remained the tightly knit family we used to be. Eventually a few of us moved away from underground sounds to more mainstream ones, but in most of us, the love for the original House music remained. Claude Monnet's Back To Fundamentals project was for me a great opportunity to return to what made us be what we are today. I liked the idea for two reasons, it would give me the opportunity to create a dance music track, which is something I rarely do, and be together in the same project with my friends of the original French House scene. I looked back at what made me become a DJ and producer, and what was the first kind of dance music i got into. I started DJing in the mid 80's which was a crossover time for Dance music. The original Disco from the 70's was fading out, and new technology was giving a fresh sound to dance music. It was a time where acoustic was meeting electronic, with lots of experimentation. With Electra 80 I wanted to recreate that atmosphere, blending those late organic Disco and early electric New Wave sounds, as I used to play them when I started DJing in the 80's. Electra 80 is a tribute to a time where dance music had not as many genres and boundaries as today. The rules were being re-written by vanguard producers and DJ's, and clubbers were ready for anything, as long as it had a good groove.